One of Rhode Island’s most important families – politically, financially, and historically – is packing up and leaving the state.

For centuries, a so-called “five families” ruled Rhode Island. The Browns, the Goddards, the Sharpes and the Metcalfs (where Stephanie is from) – the Chafees are an original Rhode Island “founding” family, in a list that has sometimes included the Lippitts and others, according to the source.

Families have dominated local and national politics for centuries, most recently with former U.S. Senator (and U.S. Navy Secretary) John Chafee, to his son Lincon’s tenure in politics, from Mayor of Warwick to Presidential aspirant .

When asked if the family’s departure had anything to do with Rhode Island’s tax structure, Chafee said “no.”

“It’s a new adventure, that’s the motivating factor,” Chafee said of the move, as originally reported by the Providence Journal. “We have properties in Rhode Island, that will not change. We will always contribute to Rhode Island.” 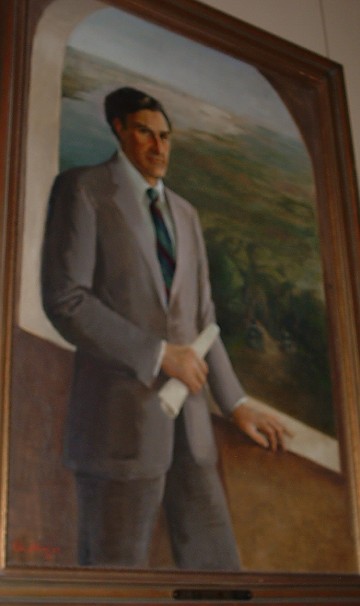 Portrait of the Governor by John Chafee

The Rhode Island Republican Party used the news of the Chafees’ departure on Tuesday to advocate for policies aimed at keeping more wealth in Rhode Island.

“Lincoln and Stephanie Chafee have been active in Rhode Island politics and philanthropic efforts for many years. Wyoming is a state with no personal income tax or estate tax,” the RI GOP said in a statement. .

“In 2006, Lincoln Chafee’s campaign slogan for re-election to the U.S. Senate was ‘Keep Chafee,’ a slogan used by John Chafee during his 1964 gubernatorial re-election campaign. Today, Republicans are expected to adopt this slogan again. We need to keep Chafee and other charitable people rich in Rhode Island. But we can only do that by lowering our taxes. It starts with eliminating Rhode Island’s estate tax,” said RI GOP Chairman Brandon Bell.

“It’s time for politicians in the State House, like Speaker of the House Nicholas Mattiello, to stop talking about cutting the estate tax and getting rid of it,” Bell said. “Make this year for Rhode Island to eliminate its death tax. Let’s keep Chafee in Rhode Island.”

“Well, we bought property here a few years ago and we’re spending more time there,” said Chafee, who lives in Teton Village, at the foot of the Jackson Hole ski resort. “Stephanie wanted to get involved in the community so she registered to vote here and Caleb got a job here – he’s successful and happy.”

“It’s America, anyone can do what they want, but you have to be smart. For many of us, Ralph Nader’s candidacy in 2000 changed the history of the world,” he said. said Chafee. “Bush and Cheney became the ones who made the decisions that affected the world, not Al Gore.”

“You have to be smart and see the big picture. I saw where Cicilline on GoLocal brought up the issue of a longtime Democrat running as an independent,” Chafee said. “We saw it in Rhode Island with [Joe] Trillo – a Trump Republican who is running as an independent. Even Spencer Dickinson split the vote in the Democratic primary. People will say, ‘Oh, [Governor] Raimondo won with 50%… but [both Trillo and Dickinson] muddy the waters.”