News Corp.’s $1 million donation at the Republican Governors Association in June may have received a flurry of press and critics shouting “I told you so.” But the company, owned by conservative Rupert Murdoch, was not the only business conglomerate including prominent television outlets to donate large sums of money to politics.

The parent companies of six major media outlets all donated five to seven figures to political organizations in the 2010 election cycle alone, according to analysis by the Center for Responsive Politics.

These figures do not reflect the extra money given by people who work for the companies.

(Download a spreadsheet of Media Company PAC and Committee 527 donations here: Communication_Company_PACs.xls and here: Media_Comanies_527.xls. And remember to credit the Center for Responsive Politics when using this data.)

PACs and 527s are similar in that they are both vehicles used to influence federal policy. But they differ in terms of contribution limits (the 527s have none) and how the money they collect is used. For example, while PACs can run ads expressly advocating for or against candidates and endorse specific parties or candidates, a 527 must register with the Federal Election Commission to do so.

Tom Rosenstiel, director of the Pew Research Project for Excellence in Journalism, says problems with media participation in the political system are nothing new, and he argues that journalism was once much more partisan than it is today today.

“While companies can now donate to candidates, there were ways to make political contributions even before that,” he said, citing GE’s multimillion-dollar lobbying efforts as an example.

Over the past two decades, GE has donated more than $12.5 million to federal political entities, slightly favoring the right by one percentage point. During the same period, the Walt Disney Co. donated nearly $3 million and favored Democrats an average of 54% to 46%. GE contributed $1.62 million this election cycle.

Comcast, the nation’s largest cable company, has donated more than $7.2 million to PACs over the past nine years, including nearly $1.9 million over the past two years. Time Warner, owner of CNN and others, has provided just under $5 million to federal political candidates and committees since the 1990 election cycle and nearly $200,000 in the current election cycle. 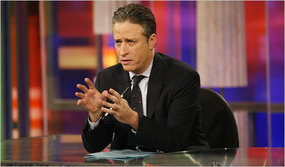 However, National Amusements, which owns Viacom — and therefore Comedy Central, on which Stewart’s show appears — has so far donated more than $330,000 to political organizations during the 2010 election cycle for a total nearly $900,000 since the 2006 election cycle. Before being purchased by National Amusements in 2005, Viacom donated just under $2 million to political committees from 1999 to 2004. In both cases, the money generally favored the Democrats.

While some of the companies in question are primarily media owners and operators, some giants such as GE have many other business activities. The Center’s data includes all the subsidiaries of these companies in order to show all the political influence of the parent companies.

There are concerns about what this might mean for the future of corporate media involvement in the electoral system. Some new political committees created this year in response to the high-profile Supreme Court campaign funding decision Citizens United v. Federal Election Commission and other recent court rulings can raise unlimited amounts for ads as long as they don’t contribute to contestants, because the OpenSecrets Blog Previously reported.

Kevin Smith, spokesman for the Society of Professional Journalists, expressed unease about the financial and philosophical motivations behind such a generous donation from corporate media owners.

Although News Corp. made the large donation to Republicans, “Fox News is the highest-rated news network,” he said. “And they’re still gaining ratings because of having a Democrat in power.”

While Jack Horner, a News Corp. spokesperson, said that it is “wrong for a corporate donation to have any bearing on our information-gathering activities”, others argue that is beside the point.

Rosenstiel, of Pew, said judging these issues is not based on right and wrong, but on how an audience reacts to them.

“Journalism is a reputation business,” he said. “The appearance of a conflict of interest is the important thing, not necessarily whether or not [the donation] influence the content.

The general trend shows that all media conglomerates gave disproportionately more to Democrats from 1990 to 1994. In 1996, they started favoring Republicans by an average margin of about 8 percentage points until 2008 when the Democrats had all six (including News Corp.) giving them half or more of all donations.

Murdoch’s News Corp. has a seven-figure donation history, the Australian Sky News reported. In 1996 he donated $1 million to the California Republican Party, which – using the United States Bureau of Labor Statistics inflation calculator — would be equivalent to nearly $1.4 million in 2010 dollars.

Additionally, other media companies have shown they are breaking away from their perceived inclinations.

GE, which owns NBC, CNBC and MSNBC, is perceived to be left-leaning and directed 59% of its $1.62 million in that 2010 election cycle to Republican political entities. Additionally, between the 1990 and 1998 election cycles, Fox Inc., a subsidiary of News Corp., donated more than 60% of its nearly quarter-million-dollar total to Democratic political interests, according to Center data.

The Pew program director made sure to point out that News Corp. is more than Fox News

“Not all of their products are accused of having this bias,” Rosenstiel said. “It’s a much bigger business than that.”

The most recent donation from News Corp. to the Republican Governors Association is notable, however, because most organizations — media and otherwise — choose to make many smaller donations instead of one eye-catching lump sum.

A review of data specific to 527, of which there are fewer donations, shows that News Corp.’s one-time $1 million contribution. accounts for 41% of all parent company contributions to Republicans and 58% of all donations to 527 groups, from the six media companies in question since last year.

Rosenstiel said the stakes have indeed been raised.

Feel free to distribute or quote this material, but please credit OpenSecrets.
For permission to reprint for commercial purposes, such as manuals, contact OpenSecrets: [email protected]

At OpenSecrets.org, we offer in-depth stories about money in politics in the public interest. Whether you’re reading about the 2020 presidential fundraiser, conflicts of interest, or the influence of “dark money,” we produce that content with a small but dedicated team. Every donation we receive from users like you goes directly into promote high-quality data analysis and investigative journalism you can trust.